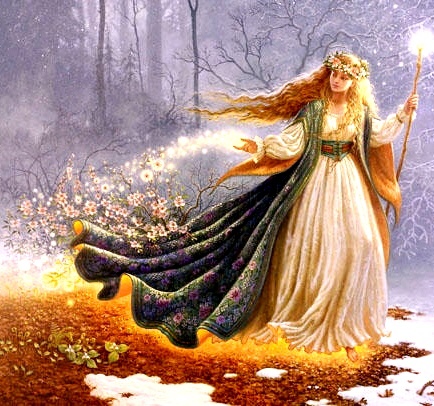 To think about the Great Mother in our patriarchally oriented society is more than merely radical, especially when the one doing so is a male who has come to reject the great father in the sky with whom he grew up and instead to embrace the Great Mother who is all around us, in us, and through us.

That the first gods were female should be self evident. Our earliest ancestors, Homo Sapiens Neanderthal, Homo Sapiens Cro-Magnon and Homo Sapiens Sapiens (modern humans), originally lived in small communal groupings or tribes. Their most important communal values were sustenance, nourishment to sustain the living, and progeny to sustain the community from one generation to the next. And again, self evident, all new life came from the mother. She is the original creative force in the universe. What is not self evident, even today, is the father’s contribution to the creation of new life. What is self evident without further instructions is that the male opens the womb and nothing else.

Another thing that’s self evident to most folks is that sense of a reality beyond what we can perceive beyond our physical senses, a sort of spiritual reality. But I suspect that even that is a modern conception, an attempt to verbalize and thus make concretely real what is, in fact, an abstract awareness unconnected to anything in our everyday world of people and things.

Yet, abstract or not, it is most assuredly real. The problem for many moderns is that we limit our acceptance of what is real to that which we can sense on the physical plain (i.e., what we can see, hear, touch, taste or smell). And I suppose that sounds reasonable, but is it the case just because we say it’s the case. Sort of like baseball’s infamous inside fly rule. We have to ask, is it a true reflection of reality or is it just a matter of convention?

I’ve somewhat digressed here, haven’t I. We were originally discussing how our earliest ancestors quite naturally understood their world as maternal in nature. At the same time that digression was necessary as modern arbitrary thinking has conditioned us not to trust our basic instincts but instead believe what modern patriarchal leaders tell us to believe. But I prefer to follow where my instincts lead me and where they lead me is back to holy mother.

So, who is the holy mother? Perhaps the better question, the grammatical inconsistency not withstanding is, who are the holy mother? Ultimately, the holy mother is nature herself, but we come to interact with that nature through multiple feminine manifestations that I’m going to boldly call incarnations. I call them incarnations because, in general, we treat them as such.

My affinity is with the Celtic pantheon, thus I turn to Brigid. I seek her guidance, worship and make offering to her. She occupies a prominent place on my personal altar. The Romans, on the other hand, worshipped Minerva and the Hellens (the Greeks) worshipped Athena. We imagine them as individual goddesses, each a member of a different divine pantheon. But I’m going to recklessly suggest that they are each one a unique incarnation of the same nurturing and life giving aspect of nature. But understand, this is not a backdoor entrance into some sort of hackneyed feminist monotheism (goddess forbid!) Nature is not single minded or single sided. We worship multiple different deities within a single pantheon because nature herself is multifaceted.

The three major western monotheistic traditions, each have their own male god and claim that there god is the one and only true god. There is some minimal bit of compromise between Christianity and Judaism, believing that it is the same god. But that’s a nominal compromise as each define that one god entirely differently such that, in practice, they are not the same god. Islam, of course, in an entirely different story. But what all three have in common is that in denying the complexities of the feminine they are denying nature altogether and creating a straight line out of what is in fact a complex, arabesque reality.

But I, for one, prefer to embrace reality in all of its complexity rather than living in the fairytale world of the patriarchal monotheistic faith tradition.

Honor her and be blessed by the goddess!

A member of Columbia Grove ADF (Druid), and on a Celtic path with a strong interest in Celtic magick and most recently, Faery witchery. View all posts by Caspersgrin